Nonprofit Cash Reserves: What To Do with Too Much Cash? 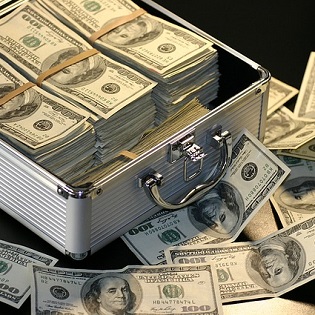 Recently we noticed an enviable problem with several of our clients. What to do with all that cash piling up?

Here are stories of three nonprofits with too much cash and how they handled it. At the end of the post we provide more information about reserves and quasi endowment.

The first organization earns fees from an educational program. They have been profitable for several years and as a result they have accumulated over $1 million in excess cash.

This organization has not taken any actions with respect to their excess funds. The money remains in their operating checking account.

The second organization was the beneficiary of an unexpected bequest about two years ago in excess of $1 million. The bequest was restricted for certain expenses and programs.  As a result, they added two new programs and increased staff wages. At the same time, fund development fell by the wayside. There was little incentive to cultivate donors when they had so much cash at their disposal.

The third organization is a museum with interactive programs for children that charges for admission. They deliberately budgeted for a profit each year for the purpose of increasing cash reserves. Through a combination of profitable programs and efforts to strengthen their base of donor support, over several years they accumulated nearly $1 million in cash.

The purpose of an operating reserve is to provide working capital in the event of a cash shortfall.   Working capital is comprised of assets needed to run the day-to-day operations of the organization. Generally speaking, it’s the money needed to fund payroll, pay contractors and other vendors, and provide programs in advance of receiving payment. Organizations need to plan for how they will have enough cash available to meet monthly obligations, especially if cash flow is variable.

Reasons for a Cash Shortfall

A cash shortfall could occur for many reasons:

The amount of operating reserves you need depends on your business and comfort levels.  A typical goal would be enough to cover three to six months of expenses.  Because the point of an operating reserve is to provide immediate access to additional cash, the investments chosen for an operating reserve should be highly liquid, such as a money market account or extremely short term CDs.

After adequate cash is set aside as an operating reserve, the next goal would be setting aside funds for a capital reserve. The museum in example  #3 above has a campus with buildings, equipment and exhibits to maintain. Buildings and equipment wear out and need regular repair and replacement. Therefore it’s a good idea to save money for such needs. For example, the museum’s roof may have 15 years of expected life left. Setting aside funds to reroof in 15 years would be a smart move.

Funds set aside as a capital reserve that are needed in the longer term, such as ten years or more, may be invested in securities or other investments that are less liquid and/or that are subject to market risk. For example, a diversified portfolio of dividend paying stocks or a 5-year CD might be prudent choices. We recommend consulting with a professional investment advisor or community foundation in this regard.

Endowments, whether true or quasi, typically are intended to be invested for a long time, often forever. As a result, endowment funds are usually invested with professional money managers in investments that are subject to market risk, such as stocks and bonds, to maximize the potential for long term gains.

Be Ready to Manage Excess Cash

Organizations can be ready for an unanticipated large gift by establishing a policy that unrestricted gifts over a certain dollar amount will go to reserves to the extent needed to reach board established goals and any excess will go to quasi endowment. That way there is no temptation to use up the funds in ways that may not be in the best long term interests of the organization.

Plan ahead for excess cash. Even if you don’t receive a windfall bequest or have a wildly profitable program, you can budget for a profit and work toward a positive cash flow. You might just surprise yourself at what your organization can achieve!