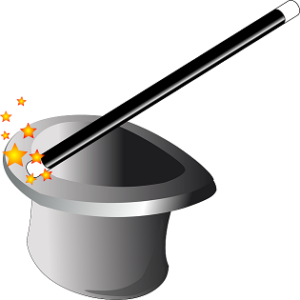 When we talk to nonprofit organization leaders about budgeting, we find they are usually thinking in terms of budgeting cash in and cash out. Even if you budget on cash basis (as opposed to accrual basis), you still need to capitalize and depreciate fixed assets.

Accounting for fixed assets throws a big monkey wrench into the whole cash-in cash-out idea. If you’ve been following our last two posts, Fixed Asset or Expense? and Dole Out the Depreciation! you learned that fixed assets go on the balance sheet as an asset, not on the profit and loss report as an expense. Depreciation is how you expense a fixed asset over a number of years instead of all at once in the year you buy it. Fixed asset transactions do not follow the flow of cash.

You Have to Be a Magician!

The problems arise when you try to prepare a budget to account for fixed asset purchases and depreciation. A budget is based on income and expense accounts. When you enter the budget into your accounting system it enables you to run budget-to-actual reports to compare budgeted amounts to actual results per the profit and loss report. The profit and loss report does not include fixed asset purchases or sales, while it does include depreciation, a noncash expense. Maybe you have to be a magician to budget for fixed assets!

Fixed assets eventually wear out or become outdated and need to be replaced. What if, in addition to budgeting annual noncash depreciation expense, you also moved actual cash from the operating bank account to a reserve bank account for capital equipment replacement?

What if you make the van part of an ongoing capital campaign to replace aging equipment? Donors, especially new donors who have not built up a level of trust and connection to your organization, love to donate for something they can see and touch. Here is an excellent first or second gift opportunity. As you accumulate replacement funds, send progress reports to your donors. When you finally buy the new van, send a big thank you along with a photo to each donor who contributed showing your smiling clients waving out the windows. You could even throw a donor appreciation party and show off the new van your donors made possible.

Budget Magic for the Van Purchase

What about the van itself? If you purchased the van for $30,000 and you had enough money in your Reserve Bank account to pay for it in cash, you would simply transfer the money into your operating account and write a check. If you financed the van, you would receive loan proceeds sufficient to cover the van cost greater than the down payment. In either of these cases the transactions to buy the van would impact cash flows, but not expenses.

So how do you get all of these transactions related to the van into your budget? The trick is to use “other income” and “other expense” accounts.

The transfer into operating cash from reserves for the cash paid would be recorded to “other income” and “other expense” type accounts called Transfers In and Transfers Out. These accounts would net to zero. Budget the transfer amount using these accounts. The fixed asset purchase would initially be recorded to an “other expense” type account for Capital Purchases which can also be used for the budgeted van purchase. At year end, you would zero out Capital Purchases and move the van to a fixed asset account. However during the year, you would treat the fixed asset purchase as an expense so you could budget the cash outlay for it.

If you had to finance the van, you could also treat the loan proceeds as an “other income” account during the year. Loan payments could be recorded to an “other expense” account at the gross amount of the payment. At year end you would close out these accounts. The loan proceeds go in a liability account on the balance sheet. The loan payments would also be zeroed out and reclassified as reductions of the loan balance and interest expense.

And for Our Next Trick…

With these tricks up your sleeve, now you can budget all of your organization’s cash flows, not just income and expenses more closely linked to cash.

Next we’ll reveal how to clone yourself so you can do the work of two human beings. Just kidding — if you work for a nonprofit, you already know how to do that!